Fabrizio Peco, from his real name Fabrice G. Pecoraro, born on January 5th 1974 in Liege (Belgium), is a musician, author and performer of electronic music, reggae, pop and hip-hop. A real fanatic of percusions and djembé drums, his performances in the most fashionable clubs and bars worldwide have made of him a must-seen of wild party nights.

Born into an italian family (sicilian to be precise), music has always been part of his life. This passion comes from his father, a construction worker and also battery player for Les Tigres Sauvages. One could say that he was born with the battery sticks on the hands: since he is 6 years old he plays the battery and at 7, he receives as Christmas gift a synthetiser Korg M1, opening up his composer side.

Fascinated by the new instrument, Fabrizio Peco begins to build a parallel universe: by day, a happy kid, a good boy and great student. By night, in his room and often times isolated from adults, he begins to learn by himself to play the piano, and explores creating his first songs.

Encourage by his parents, he attends the Music Academy in Liege, where he will follow five years of music theory as well as singing courses.

In 1990, at a singing contest in Liege, he is spotted for his voice and his talent as a composer. Finishing in third place, Fabrizio receives the first award from the public. He is only 16 years old.

Early during his childhood, often together with his father playing the battery,  performing begins his favorite playground. Marriages, birthdays, local and regional parties, performing in public will become a constant. In 1999, while he is the keyboard player of the group reggae Omega Radics, Fabrizio Peco decides to change his course, looking for new things. He begins a carreer in solo, and begins to attend the most fashionable clubs of the moment. It is there that he listens the latest trends, and soon creates his on persona, creates his own make up and imposes his proper musical style, combining his voice and his talent as a drummer.

In 2006 he signs with Epsy Record, under the label Universal, and launches several of his work, like "Camminare", "Anima Persa" that he will play amongst others in 2008 at the Festival des Migrations et de Cultures, in Luxembourg. In 2010, Fabrizio Peco departs from Epsy Record to create his own production studio. He will launch the albums "MYS2 - Ma guarda un po" in 2011 and "Life is a Game" in 2013, distributed by LanderPr-London.

Fabrizio Peco has suffered serious health problems because of a vascular malformation from the time he was born. He has endured brain surgery nine times. It is because of this that he is a co-founding member, and artistic sponsor, of the VASCAPA association.  He is also engaged in other causes, like consulting for Dr. Stefano Dallari for the Foundation for the children of Tibet, at "Casa del Tibet" located in Italy.

Fabrizio Peco is an adept of meditation. While he is known for being remarkably energetic, he is also known for his "zen attitude". 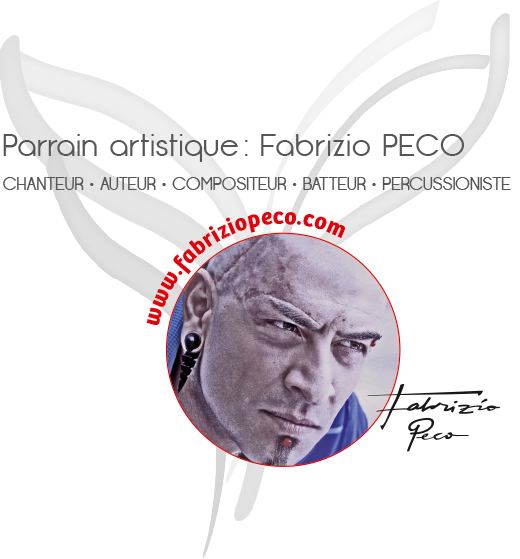